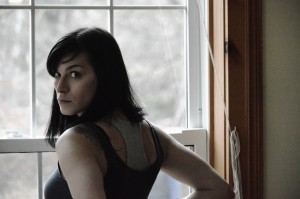 Nicole Steeves plays Lara, a woman in her late twenties who has seen the darkest corners of the world since a very young age.In her early teens, she ran away from a troubled home and wound up on the streets as a prostitute and heroin addict. Trapped by her demons, Lara descended into a personal hell. Eventually she met Eve and fell in love. Desperate to leave her troubles behind her, Lara is willing to do whatever she has to in order to survive and start over again with Eve somewhere far away. But can she ever escape her past?

Nicole Steeves is a Halifax-based actress currently studying at Neptune Theatre School. She has appeared in short films and music videos; The Cuckoo in the Clock is her first lead role in a feature film. She has since had a lead role in sci-fi thriller Roundabout, which is due for release in December 2014.